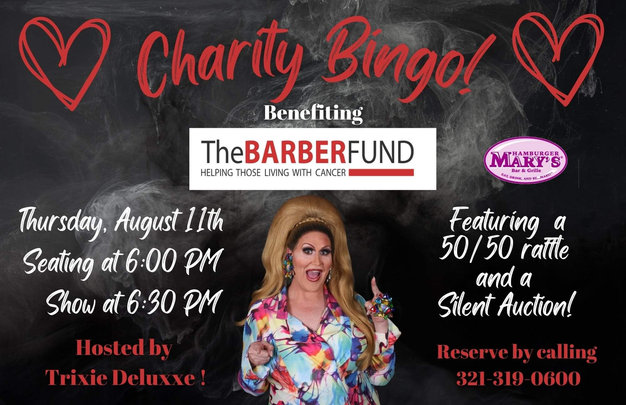 Join in for Charity Bingo Benefiting The Barber Fund at Hamburger Mary’s. This event will feature a 50/50 raffle and a silent auction. Trixie Deluxxe will be the host of this show. Reserve by calling (321) 319-0600

The Barber Fund is a grassroots 501(c)3 foundation, established in 2014. We are an ALL-VOLUNTEER ORGANIZATION located in Orlando, Florida. Our mission is to help those battling cancer by paying household expenses so that these warriors & their families can focus on healing. We have paid mortgages, power bills, medical bills, phone bills, purchased groceries, chaperoned appointments, cared for animals, and so much more.

Whether it’s giving a patient a ride to chemotherapy, putting together a team for Relay For Life®, or simply just being there to talk to and offer encouragement, there are multiple ways you can join the fight against cancer. A great way to get involved with The Barber Fund is to participate in an event! We have a variety of events to choose from.

The Barber Fund was Co-Founded by the late John “Tweeka” Barber while fighting a form of Cancer called Sinonasal Carcinoma. Sadly, John lost his battle in 2011, a year after rigorous treatment including many rounds of Chemotherapy and Radiation.

John may have lost his battle but today his legacy lives on. John touched many lives as an Entertainer, Philanthropist and a pillar in the Orlando Community. So in true

“TWEEKA” fashion, he wanted to create something that would keep his spirit alive, THE BARBER FUND!

Located downtown, Hamburger Mary’s Orlando is the perfect place to Eat, Drink, and Be… MARY! Come on in for a bite and stick around for one of our weekly events.