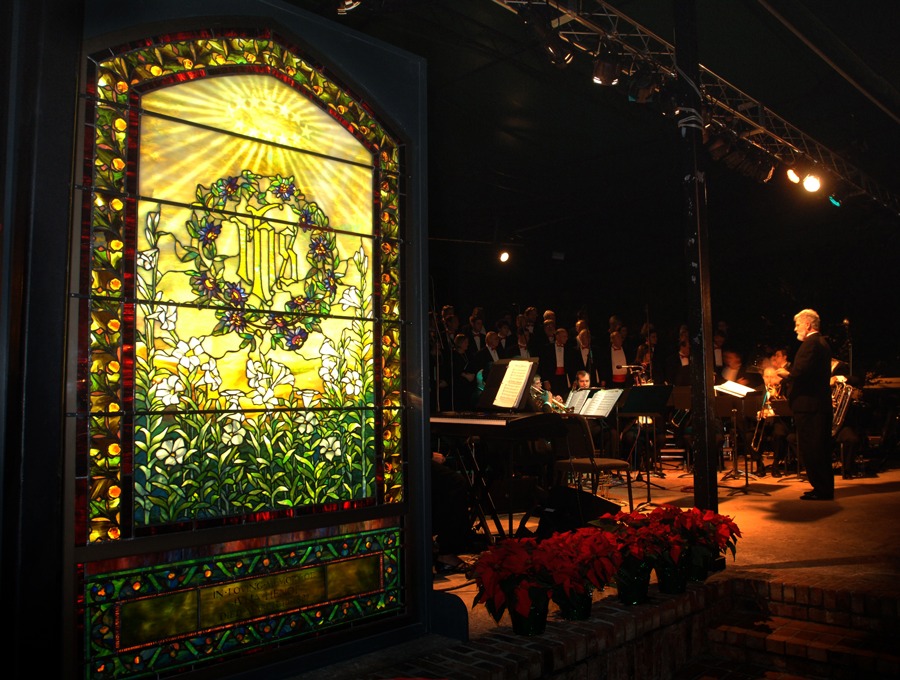 On Thursday, December 1, the Charles Hosmer Morse Museum of American Art and the City of Winter Park will present the 44th Annual Christmas in the Park in downtown Winter Park.

The free outdoor event begins at 6:15 p.m. when century-old Tiffany leaded-glass windows are lighted. Central Park is then transformed into a luminous concert hall for the Bach Festival Society Choir and Brass Ensemble. The choral performance concludes at about 8 p.m., and the windows remain lighted for viewing until 8:30 p.m.

Christmas In The Park

Each year, on the first Thursday of December, the Morse Museum helps launch the holiday season in Winter Park when it lights up Tiffany windows in Central Park and presents the Bach Festival Choir and Brass Ensemble in concert. This December is the 44th annual celebration of Christmas in the Park. Christmas in the Park was started by Hugh and Jeannette McKean, the Morse Museum’s benefactors, in 1979 as a way to share a part of their rare Tiffany collection with the public in an informal setting. Today, the Morse and the City of Winter Park co-sponsor the event.

For 35 years, the Museum was housed on the campus of Rollins College. It was known as the Morse Gallery of Art. In 1977, it was relocated to 151 East Welbourne Avenue in Winter Park. It’s name was changed in the mid-1980s to The Charles Hosmer Morse Museum of American Art.